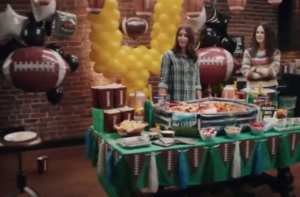 Scene: Two 30-something women stand behind a table of party food, in a Party City commercial.

What did Party City think would happen when they unleashed this mean-spirited ad? That moms everywhere would laugh uproariously at a life-threatening illness that affects between 1 and 2 million U.S children and rush right out to stock up on those inflatable snack stadiums?

Mom 1: Have you seen the new Party City commercial?
Mom 2: Oh, you mean the one where two grown women make fun of a little girl with a serious autoimmune disorder?
Mom 3: The one that made my six-year-old cry and ask if people really thought she was gross?
Mom 4: I’ll tell you what’s gross: the agency that created it.
Mom 5: And those disgusting-looking inflatable snack stadiums.
Mom 6: I’m just glad we don’t know people who really act like that.
Mom 7: And airing it on a children’s network!
Mom 8: Incredible.
Mom 9: Having a son with severe allergies, it makes me want to punch someone.
Moms 1-8: How about Party City?

Party City (and their agency of record, Hill Holliday) heard the angry “chatter” and last week pulled the commercial, offered a public apology:

“Party City values its customers above all else, and we take your feedback extremely seriously. We recognize that we made an error in judgment by running the recent Big Game commercial, which was insensitive to people with food allergies and autoimmune diseases. We have removed the commercial from our website and all other channels, and sincerely apologize for any offense this may have caused. We’d also like to clarify that Sunny Anderson was not involved in the creation of this commercial in any way, and we apologize for any offense it has caused with her audience and fans. We will also be reviewing our internal vetting process on all advertising content to avoid any future issues. In addition, Party City will be making a donation in support of Celiac Disease research.”

But the damage was done, and the follow-up comments on the company’s Facebook page came fast and furiously:

On the one hand, behold the power of social media. On the other hand, what on earth was Party City thinking in the first place?

Never mind the bullying humor (haven’t we had enough of that since, oh, I don’t know, inauguration day?) and the poor production value (Hill Holliday, what the heck?). What I want to know is why didn’t anyone stop to ask if this would resonate with Party City’s audience, which is — if my own Party City Newington, NH, branch is any kind of indicator — moms?

Moms looking for Disney Princess-themed tablecloths. Moms trying to find a Thomas the Tank Engine piñata and matching party hats. Moms rushing out at the last minute to get a big box of plastic silverware because they thought they had some in the basement but didn’t. And yes, moms who either have a child or know someone who has a child with a serious, often life-threatening, food allergy?

So what is the moral of this story? I don’t even know where to begin. But maybe with “Don’t offend your target audience”? And just as a general rule to live by, especially now, let’s all try a little harder to be a little better. To rise above the meanness. It’s all so exhausting. Especially for us moms. Seriously, we’ve had enough. What the world needs now is a little more kindness.

Copy We Wish We’d Written: Henkel
Well, it’s about time!
Millennial Say What? How to Talk Young When You’re Old.
He’s Just Not That Into You
Why Does This Little Girl’s Blog Have Over a Million Visitors?
My Boyfriend Doesn’t Get Me but My Deodorant Totally Does