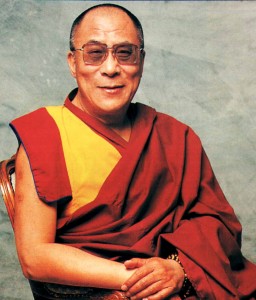 “Is it wrong to hide the Dalai Lama’s posts?” I asked on Facebook a couple of years ago. “They’re just so frequent.”*

I wonder if Tenzin Gyatso saw this recent profile in Fast Company, which featured Rufus Griscom talking about how to build online communities around your content. We liked what RG had to say.

(Griscom and his wife cofounded the popular parenting site Babble, which they sold to Disney for a whopping $40 million last year. I loved Babble’s irreverent approach to covering parenting. Babble has also published a couple of my essays and featured another Hired Pen, the ever-awesome Jane Roper, as a regular columnist.)

Griscom argues you should share content on social networking sites because it helps you gauge its effectiveness:

If we have more comments on a Facebook post than on our own site, are we pushing the conversation or the audience away? But of the 6 million folks who come to Babble each month, about 35% are coming through social media — Facebook, Twitter, Pinterest, Stumble-Upon, and various aggregators. And we started to realize that a lot of these are actually filtering our content better than we are.

Ah, filtering. These social networking sites make it too easy to post a picture of that delicious bagel you had for breakfast, or 11 “invitations” to the same event/launch/”opportunity” (as with my small-business-owner Friend),or 4 different meditations in the span of a few hours (You Know Who You Are ;))

So go ahead and post, pin and tweet your content (we do). But pay attention to those likes, comments, shares and follows, and don’t make your posts so frequent or generic that people skim right over them.

Thoughts on “A Glimpse Into the Future of Marketing”
He’s Just Not That Into You
Oh, Internal Self, You Slay Me!
Oh, Social Media, How Far You’ve Come
Tweet This, Not That: Five Tips for Writing Effective Tweets
The Hired Pens Advice Column: Ava’s Hot Dog’s