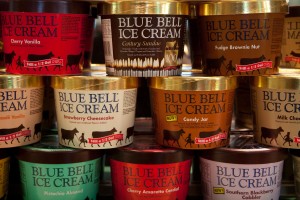 My 12-year-old neighbor, Phoebe, returned from a trip to Houston and couldn’t wait to tell me about the ice cream she’d discovered, Blue Bell, and the company’s super fun slogan, “We eat all we can, and sell the rest.” (Phoebe’s not aware that I write copy for a living, but she knows how I feel about ice cream.)

I Googled Blue Bell to see what other good stuff they’ve come up with and found another great slogan, “Making Texas Cows Proud,” and a terrific New York Times piece by that name from 2006. The article attributes Blue Bell’s “snappy slogans” to an ad man named Lyle Metzdorf and to the company’s founding family members, the Kruses.

Who knows whether these particular two slogans came from the family or their ad guy. That’s the point: You can’t really tell. I bet Blue Bell and their copywriter made for a great marriage — that Lyle Metzdorf realized he had struck awesomeness with the Kruses and could take the personality they’d cultivated for the company and just run with it.

Here’s an excerpt from the NYT piece:

Ads are all-important, Ed F. Kruse, 78, the company’s avuncular chairman, said in an interview. “You could put gold nuggets in the ice cream, but that wouldn’t do you any good unless you get it into people’s mouths so they can see if they like it.”

The Blue Bell ad man, Metzdorf, died in 2002. I learned from his obituary that he was born in 1935, began his career as a gag writer and wound up starting one of the biggest ad agencies in the southwest. He sounds like a talented guy who told a lot of great stories.

Hats off to you, Mr. Metzdorf. I can’t wait to try that ice cream.

Copy We Wish We’d Written: Henkel
Ten Tips for Coming Up with Great Blog Ideas
The Hired Pens Is Featured in The New York Times … Well, in a Not-so-roundabout Way
Our Own Karen Dempsey Published on NYTimes.com
An Old Friend, On His Way Out

What the Dalai Lama Could Learn from Fast Company Hey, Moms! Are You Looking for the Perfect Father’s Day Gift for Your...
Scroll to top