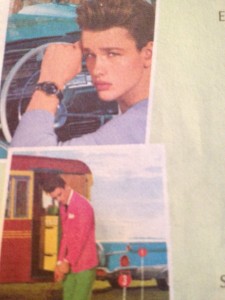 The week before Father’s Day, I was flipping through the New York Times “Sunday Styles” section and came across this ad. It was for a department store I hadn’t heard of, and the caption was something like, “Hey Moms — give Dad what he really wants this Father’s Day.”

What? To spend time with his personal trainer, “Karl”?

Seriously, look at the image they selected for this ad. Is that supposed to be the dad? Because even if he did look old enough to have children, my guess is he’d be doing it with another dude. And good for that department store if they were targeting gay dads. But “mom” was in the headline.

I’m sorry, but even if he were wearing an old T-shirt and cargo shorts filled with bottles and toys, he still wouldn’t look like any of the dads I see at the park. And I’m guessing most moms (the assumed target audience here) would agree. Or maybe we’re all just going to the wrong parks.

Next year, Creative Director Who Dreamed Up This Ad, ask not “Who’s your daddy?” but rather, “Who’s your audience?” You’ll probably sell more jaunty, hot pink blazers. Or maybe not.