One of the great things about being a writer is asking people questions. I began my writing career as a journalist, so I got plenty of practice doing just that.

Back then, the interviews were pretty mundane. I had to be creative in coming up with questions because the interview topics weren’t always that interesting (at least at first glance): a profile of the town librarian, a feature on the new sewing shop, etc.

I later worked as a sports reporter, which was a thrill for a big sports fan like me. Now, the interviewees were recognizable and sometimes even intimidating. But being athletes and all, the intelligence levels often hit subterranean altitudes, resulting in simplistic or clichéd answers.

These days, I’m doing a lot of work with Massachusetts General Hospital. No shortage of brain power over there. They’ve been a client of ours for almost two years, and I’ve picked up just enough medical knowledge to become dangerous. 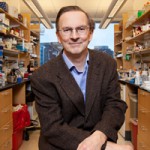 But a recent assignment with Mass General had me nervous. I was asked to profile Jack W. Szostak, PhD, of the Department of Molecular Biology. Let’s just say he’s not your run-of-the-mill researcher dissecting frogs. In fact, he’d just been awarded the 2009 Nobel Prize in Physiology or Medicine.

I’d interviewed countless people over the previous 15 years, but never a Nobel Prize winner. During my prep work, I came to realize what a huge impact Dr. Szostak’s work has had. (In the interests of not scaring off non-scientific types, I won’t go in to the details here.)

In the hours leading up to the interview, scary thoughts flew through my head: What if I ask a dumb question? What if I don’t understand what he’s talking about? What if he senses intellectual weakness and calls me an idiot?

Fortunately, Dr. Szostak is the type who suffers fools gladly. Our half-hour on the phone couldn’t have been more pleasant … well, at least for me. He came off just as I’d like to come off if I were in his position: friendly, humble and accommodating. What a relief.

If you’d like to check out the fruits of my labor, here’s the link: http://massgeneral.org/about/newsarticle.aspx?id=1988.

PE4ME: The Maine State Phys. Ed. Department Misses the Point The Grumpy Old Copywriter: No, I Won’t Be Your “Friend”
Scroll to top