I’m on to you, Lorillard, Inc., manufacturers of noted cigarette brands Newport, Kent, True and Old Gold. And now the truth will come out. 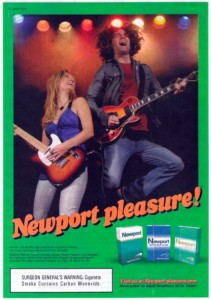 Pictured: Not a real band.

Yes, I’ll admit that as a 12-year-old, I snuck into the woods in back of my house to sneak a Newport with my friend Neil. But that was nearly 30 years ago. The statute of limitations has long since expired, and I can no longer be jailed, fined or grounded by my parents. So don’t even try to hold that over my head.

Here’s my shocking revelation: I know the woman and man pictured in a recent ad placed in People magazine don’t actually play in a band!

How have I, a lowly copywriter, managed to uncover this potentially devastating secret? As it turns out, I happen to play guitar. Not very well, but I play it nonetheless. Calling on my years of experience, I present the following evidence:

Sorry I had to let the cat out of the bag, Lorillard, Inc. But sometimes (unless I’m being bribed generously) I just have to stay true to my conscience.

So you’re nine. So what? That’s no excuse for ineffective signa... When It Comes To ROI, Don’t Be a Mad Man: Part 1
Scroll to top