We love guest posts from our pal at King Fish Media, Gordon Plutsky, especially when he writes about our favorite show. Take it away, Gordon … 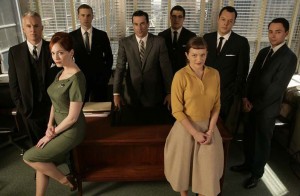 At the end of July, the AMC show Mad Men returns for its fourth season. The world of media and marketing has changed since the early 1960s advertising heyday. Aside from the obvious cultural changes (drinking, smoking and sexually harassing women in the office were completely acceptable, along with being racist, homophobic and anti-Semitic), the biggest difference is the introduction of an essential measurement that clients now expect their agencies to show: the marketing return on investment.

The Mad Men days were golden ones for media companies and agencies because there was little to no accountability. Marketers spent millions on TV, radio, billboards and magazines, but there was scant actual proof any of it worked. Yes, companies could look at brand sales during the same period of time as a campaign and make some judgments, but it was hardly an exact science.

Media decisions were often made based on the personal — and subjective — logic and taste of the executive who carried the most weight. For example: Think how much money has been spent — and likely wasted — sponsoring golf tournaments.

The advent of cost-per-click from Google changed the equation forever. Suddenly, marketers only paid for consumer action and the “branding” was free. Where did that leave the media empires that were selling the branding opportunities for a king’s ransom? More than a little compromised.

The newfound demand for media measurability among companies formerly beholden to traditional advertising now drives the media itself. Just look at the explosion of digital magazines, mobile/tablet apps and similar media that allow consumers to connect directly with brand content.

Even television is not immune: That medium is now merging with innovative online sites such as Hulu and ESPN3.com to remove the barriers between broadcast television and the Internet to tap into consumer-behavior metrics.

And marketers are already looking toward the next wave of development. So what’s next? We’ll explore that in Part 2 …

Gordon Plutsky is the director of marketing and research at King Fish Media.

Alive with Fatally Flawed Images of Pleasure! When It Comes To ROI, Don’t Be a Mad Man: Part 2
Scroll to top