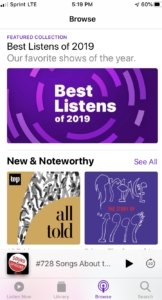 Question: What do you call two middle-aged white guys talking?
Answer: A podcast.

About a year ago, I decided that if there’s one thing the world is lacking, it’s middle-aged white guys hosting podcasts. So I decided to get in on the action — and the fame and fortune that inevitably would follow.

Choosing a topic for a podcast was simple: It had to be music. In particular, rock/alternative music from the punk/New Wave era onward. That’s my sweet spot. Now all I needed was a co-host and a theme.

The willing co-host came in the form of Anna’s husband, and fellow middle-aged white guy, Jeff Stern. He shares my obsession for music as well as my disdain for Guns ‘n’ Roses. We have similar musical genes.

As for a theme, Jeff is a man who loves his lists. He proposed having each podcast episode devoted to one list. Top cover songs, best duets, favorite movie soundtracks, etc. It sounded good to me.

We’ve since recorded a handful of episodes. Once we have a few more in the bag, we’ll start unleashing them onto an unsuspecting, and undoubtedly awestruck, public.

Transitioning From Writing to Speaking

Having been a writer for so long, this speaking thing is kind of new to me. I mean, I speak every day, in many different contexts. I’m adept at speaking at a loud volume (e.g. yelling at my kids) and in quiet hushes (e.g. comforting my kids after I’ve yelled at them). But engaging in a recorded conversation for about 40 minutes at a shot? I hadn’t done that before. It’s been an interesting, frustrating learning experience.

As a writer, I often fuss over just the right word to use. I might spend 10 minutes debating “determine” vs. “establish” or “wacky” vs. “zany” (actually, the latter scenario is pretty rare, unless I’m writing yet another piece about Carrot Top). Eventually, though, I arrive at a decision that I feel good about.

One thing I try to avoid when writing is repeating adjectives and verbs where possible. If I use “concentrate” once in an article or on a web page, I’ll try not to use it again. Not paying attention to little details like that can make you look like an amateur.

When I’m thinking on my feet during a podcast, though, I sometimes violate the taboo of excessive word repetition. During our last recording, I must have said “classic” six times in a 45-second span in reference to a favorite album of mine. Again, something I don’t pick up on until it’s too late.

Lastly, on a writing assignment, it’s all about the preparation: researching the subject and planning out what you’re going to write.

For a podcast? Research definitely matters — you have to know what you’re talking about. But if you go too far planning out what you’re going to say, you can sound overly scripted and unnatural. That doesn’t work on what’s intended to be an informal podcast. I’m aiming to staying coherent for 40 minutes while still leaving room for some improvisation and tangents. It’s getting easier.

Now, if I can just remember to speak about 15 percent slower and keep it under five “uh’s” or “um’s” per episode, I’ll have this podcast thing mastered.

Stay tuned for the launch of “Listed,” with Dan O’Sullivan and Jeff Stern, sometime in Q1 2020 (we hope).