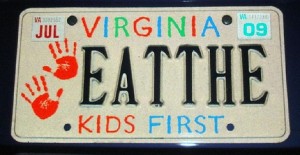 A few weeks ago, I received the following inquiry in my inbox.

How few words can a writer use and still get a point across? Poetry goes a long way to reducing words to as few as possible, and the haiku form goes even further. The ultimate in brevity, however, is a “vanity” license plate, the vanity part being pejorative. Unfairly. I think the DOT should reward cleverness and initiative and give reduced rates to creativity. On the other hand, a plate with someone’s initials, or worse, with his and her initials, should be penalized. What do you think?

We are all in favor of penalizing people for their lack of creativity, but I know that’s not your real question, so:

1.) How few words can a writer use and get the point across?

We have a magnet on our file cabinet that reads, “Brevity is the soul of wit.” I bought it for Dan as a joke after I used the quote one too many times and he got mad at me. I haven’t used it since, but I still think it’s great advice.

Case in point: The poetry class I took in grad school was better preparation for the art of copywriting than any other class I took (even one called “The Art of Copywriting”). Why? Poets really get word economy — and that’s what great copywriting is all about. You need to know how to say it (whatever “it” is) creatively and in as few words as possible.

2.) What is The Hired Pens’ official stance on vanity plates?

Yeah, talk about an exercise in word economy: just seven letters to make people laugh or think — preferably both. So, we’re in favor … if it’s done right. But what is right? I opened this discussion up on Facebook to get some OP1NYNZ.

“I’ve always loved the guy who chose the Virginia plate that has “Kids First” at the bottom, and his lettering above was “Eat The.” – Liz

I had to do a little research on this one. Turns out the DMV revoked this plate because they got so many angry letters, including one asserting that this guy was promoting oral sex with children and that was “disturbing.” In my opinion, this is a hysterical license plate and what is really disturbing is that this “angry citizen’s” mind would even go there in the first place.

“I frequently drive by a Prius with a license plate that says, “Prius2.” In case you forget the type of car you have?” – Amanda

This totally falls in the “Why bother” category of vanity plates. If you don’t have something good to say, stick with the random numbers and letters, bub.

I think vanity plates are idiotic. They’re much easier to remember in a hit-and-run accident. –Genevieve

This has got to be the No. 1 argument against vanity plates. So if you are prone to speeding or otherwise breaking the law, this isn’t the place to showcase your creativity.

This drives me crazy: when someone has a “luxury” vehicle and they feel the need to describe their car on their plate; e.g., “MY M5.” – Kim

Our talented Hired Pen, Elizabeth, gave the best response to this one: “But how awesome would it be to see something like “My Jaguar” on some crappy, rusted-out Honda?” Indeed!

Some final thoughts on word economy, creativity and vanity.

The fewer words you have to be clever, the more important they are to use wisely. But remember, no one likes a blabbermouth. We’ll take so short and to the point over long-winded any day.

P.S. We LOVE getting writing questions, so email away. Who knows, you might just find your question the subject of a blog some day.

Random Thoughts on Pedestrians with Death Wishes … and Anonymous Test... Throwing a Virtual Bouquet to Heineken for Its “Entrance” Commercial
Scroll to top