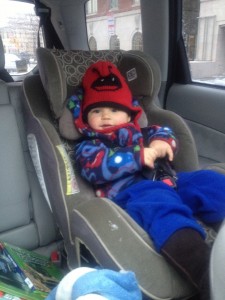 Further dispatches from the world of smart branding: On my way home from dropping my son off at school, I was flipping around the radio and stopped on an interview on NPR Business News with Jake Fisher, director of auto testing at Consumer Reports.

They were talking about how Subaru had been able to increase sales by nearly a third in recent years while other car companies were just trying to keep their heads (or turbo-charged V6 engines) above water.

So what is Subaru doing right? Actually it’s what we try to convince our clients to do every day: Find your audience and speak to them, just them. Trying to appeal to everyone, well, sounds appealing. When you crunch the numbers, though, it doesn’t work.

Successful companies like Subaru boldly define who they are and go after THAT audience, not EVERY audience. It’s as simple as picking a story that works and finding some reliable copywriters to tell that story right.

Subaru will never be a giant car company — and it shouldn’t be. As Jake Fisher explains, Subaru can serve as an example for other carmakers looking to grow:

So is who is Subaru targeting exactly? Well, I drive a Subaru and so do all my friends. Who are we? The sketch comedy “Portlandia” dedicated a whole sketch to us liberal-leaning 30-40 somethings.

The way I like to sum it up is this: We think spending a ton of money on a car is a waste; in fact, we wish we didn’t have to drive one at all. But since we do, we’ll take one that is safe and at least vaguely stylish, can handle well in the snow and has enough room for hauling around our kids/skis/dogs. And, oh yeah, we wouldn’t be caught dead in a minivan. Even the Cadillac of minivans.

BTW: Read the whole article or listen to the live show here — or just watch the “Portlandia” clip.

Copy We Wish We’d Written: Anthony Logistics For Men Talk Dirty to Me (As Long As You Get the Grammar Right)
Scroll to top