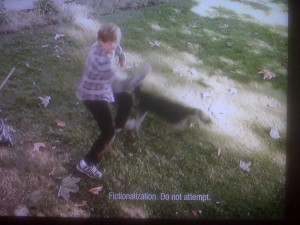 At some point in the past 15 years or so, advertisers recognized the inherent humor in small animals attacking humans. Of course, I first had this revelation roughly 25 years ago.

It was late in the evening on the East Coast, and my Red Sox were playing the Mariners in the old Seattle Kingdome. During the game, either a cat or a rat (my memory is hazy) ran onto the field. A goofy-looking groundskeeper — who sported a long, droopy mustache — was dispatched to corral the little critter.

What ensued was unintentional comedy of the highest order. After chasing the cat/rat around the artificial turf for a minute or two, the groundskeeper caught his prey. While heading triumphantly back to a dugout, the animal bit his finger. After which the groundskeeper started jumping up and down while vigorously shaking his finger in pain. I can’t remember if the cat/rat was ever brought to justice.

The image of the stricken groundskeeper comes to mind every year or two and never fails to make me giggle. Which, I guess, makes me a bad person. But it also explains why advertisers have turned to this storyline in their commercials.

Case in point: this Blockbuster ad, which was running a few months ago. A man gardening is bitten by a raccoon, which refuses to let go of his arm all the way to the hospital. In the emergency room, the receptionist says someone will see him in 28 days. (The point being, you’ll never have to wait 28 days to see hot new movies with a Blockbuster membership.)

Funny enough for those who enjoy their humor sophomoric. But what gets me is the disclaimer xanaxonlinebuy.com shown at the beginning of the ad in tiny type: “Fictionalization. Do not attempt.”

Does Blockbuster, its ad agency or its lawyers really think this paean to animal-inflicted pain would make a gullible viewer follow suit? I had to know. So I asked my lawyer friend, who wishes to remain nameless for fear of being associated with this ridiculous blog post.

When it comes to disclaimers, warranties, warning signs and even general contract language, every client asks for strategies on how to avoid getting sued. The truth is, however, that nothing can ever be done to avoid being sued. Rather, the best legal advice offers strategies on how best to ensure a victory when you do get sued. Most lawyer types believe that warnings provide a healthy deterrent against lawsuits.

Now, why would anyone need to warn people that they shouldn’t reenact a raccoon attack? Well, the law imposes liability on people whose conduct would foreseeably cause injury to another. That’s how negligence is defined. So, if you show kids jumping off a roof in a show that is directed to kids, is it reasonably foreseeable that it would influence another kid to follow suit? Maybe. Will a disclaimer insulate you from liability? Maybe.

All of those questions can be decided by a jury, who will be asked to determine what is reasonable under the circumstances. But every time people hear that a lawsuit has been filed as a result of a commercial or TV show, then it starts to make liability seem more foreseeable. And hence more disclaimers.

Wow, I had no idea. Thank you, lawyer-friend-who-shall-not-be-named for your legal insight.

Now back to the show.

Is the Em-dash the Flirty Schoolgirl of Punctuation? A Virtual Toast to 10 Years in Business
Scroll to top