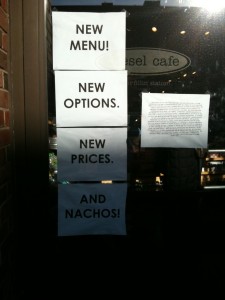 As anyone who reads our blog knows, my entries feature a reference to Diesel Café approximately 33% of the time. Why? As a small business owner, I really appreciate when other small businesses get it right. (Also, I go there a lot.) And Diesel routinely nails it. So it’s no surprise that when they upped the prices on their menu, they went about that the right way, too.

First, their employees had obviously been trained to be patient. When customers questioned them about a price change or missing menu item, they were always polite and even apologetic. At least for the exchanges I heard.

The employees had also been well-trained about the new menu. Not only did they know what was on the menu, they offered up recommendations with enthusiasm. But since this is a copywriting blog rather than a foodie blog, I’ll stop short of describing just how delicious the new tempeh burger is (very) and tell you what I loved most: their signage.

Taped to the door were four sheets of paper, each declaring a new change:

“New Menu. New Options. New Prices. And Nachos!” It probably cost all of 12 cents to do, but it works for three key reasons:

1. It emphasizes their point of distinction.

The simple paper signs reinforce — probably unintentionally — that Diesel is a small, locally owned business. This is a huge selling point for their audience — and major point of differentiation ever since Starbucks moved across the street.

2. It sandwiches the good news with the bad.

People don’t like it when you raise prices. By sandwiching the cost hike with three real benefits — new options, new menu and, the best one of all, “nachos,” it’s less of a blow. The takeaway: If your business has to make an unpopular change, think of what you can give your customers to cushion the blow. And if you can’t think of anything, hire a good PR team to spin it.

Seeing “And nachos” as the last part of the sign is perfect. Sure, they could have emphasized that the dairy is now locally sourced, which is a nice selling point, too. But highlighting the nachos was a smarter move. It shows they don’t take themselves too seriously and neither should you. Come on, the coffee is just 18 cents more. Is that really worth getting upset about? No! Plus, come on, who doesn’t love nachos with a double espresso?

See, social media isn’t the only way to cheaply and effectively reach your customers. If you’ve got a smart creative team and four sheets of white paper, you’re on your way.

Five Things I Learned: "5 Ways to Measure Social Media Marketing Success"
Social Media Tips and Insight from Lewis Howes, LinkedIn Expert
Are Twitter and Facebook Headed for a Fall?
Thoughts on "A Glimpse Into the Future of Marketing"
What the Dalai Lama Could Learn from Fast Company
Why Does This Little Girl's Blog Have Over a Million Visitors?