Earlier this week, Anna was kind enough to post a virtual toast celebrating The Hired Pens’ 10 years in business. Clearly, though, she didn’t have the courage to tell the whole story. So here’s a timeline with all the sordid details.

March 2001: Dan and Anna meet on a park bench in Arlington to discuss starting a business. Unemployed and expecting the arrangement to last no more than four months, Dan signs on. … Anna soon comes up with company name, causing Dan to seethe with jealousy every time someone says “I love your company name.” 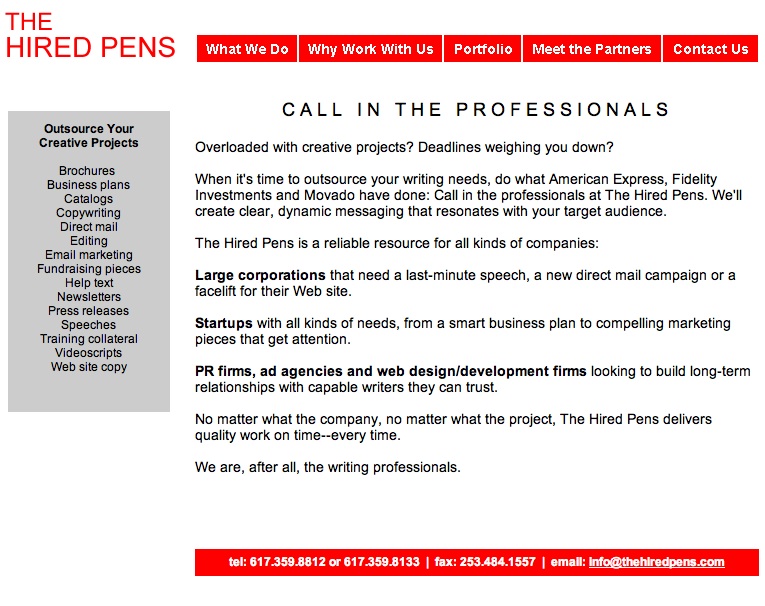 April 2001: Thwarted in attempt to buy domain name “hiredpens.com” by someone who seems to have nothing to do with pens or copywriting. … Later that month, thehiredpens.com goes live, much to admiration of Web designers around the world.

June 2001: The Hired Pens, LLC, is officially registered with the Commonwealth of Massachusetts. Item somehow escapes mention in Wall Street Journal and Boston Business Journal. … Go to our first networking event and spend much of evening cowering in the corner of ballroom.

2002: Land one of our first big-name clients, Hasbro. Work involves driving to corporate headquarters in Pawtucket, R.I., picking up car-full of toys and driving back to write about the toys. Would have been more fun if we already had kids.

2004: Adopt new tagline: “Words matter. We care.” Several months later, receive nasty letter from another copywriting agency threatening legal action because (unbeknownst to us) our tagline roughly resembles theirs. … Dan soon comes up with new tagline: “We choose your words carefully,” thus avoiding lawsuit while helping him get over Anna naming the company.

2006-2007: Gain enough financial security to start developing a moral compass. Turn down opportunities to write for a soft-porn website and for a Disney-affiliated credit card. Anna decides not to write for NAVY Seals, a decision she later regrets after they take out bin Laden. (U.S.A.! U.S.A.!)

2007: Move into first real office, ensconced in corner of unkempt woodworking studio. Decide to leave after nine months due to fear of developing fatal respiratory disease.

2008: Move into our current office, located in the heart of Somerville’s Davis Square. Enjoy overhearing drivers’ arguments with meter maids, random conversations screamed back and forth across Elm Street and annoyingly insistent come-ons of money-seeking workers with Greenpeace, Planned Parenthood and countless other organizations. … Scent of grilled peppers and onions from Chipotle downstairs occasionally rouses hunger and inspires 11 a.m. lunches.

2010: Finally get around to posting photos of Dan and Anna on website. Realize that wasn’t very hard.

June 2011: Scrap plan for extravagant party to celebrate 10th anniversary due to lack of initiative. Opt for two lame blog posts instead.