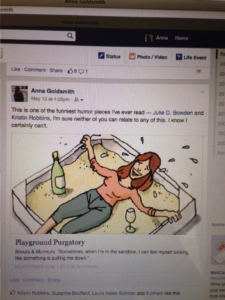 In just over 10 years, Facebook has changed how we live, work and think, becoming the primary way many of us stay in touch with friends, share family photos and keep up on news. And of course, waste time.

When I went on a digital fast last fall, Facebook was the hardest thing to give up. I justify my addiction in part because it’s been great for business: We have a company page where we regularly post engaging, relevant content for our audience. Clients, in turn, hire us to do the same for their pages.

In other words: I have both a personal and professional stake in Facebook’s success. So when I hear rumbles that it’s becoming irrelevant, it makes me nervous.

I recently read about a Princeton University study that concluded that Facebook would lose up to 80% of its user base between 2015 and 2017. Although this research has come under fire, there’s no doubt that Facebook is hemorrhaging users from the under-18 set. This is very disquieting to marketers who use Facebook as an integral part of their social marketing strategy.

So what can Mark Zuckerberg and his minions do to ensure Facebook doesn’t go the way of Yahoo (still there, but kind of “meh”)? Obviously, he has to make money — and that means keeping both users and advertisers happy.

In a recent Forbes article, Jayson DeMers explores what he sees as the two key challenges that Facebook needs to address to stay relevant. I’ll summarize below.

In 2013 independent research by Ignite Social Media found a decline in organic reach of 44% following Facebook’s News Feed algorithm change. Facebook countered that the reduced reach was simply an inevitable outcome of trying to ensure that “people have a more meaningful experience on the site.” In other words: “Relax — you’re not getting as many viewers, but they’re the right viewers.”

Today, it’s pretty clear to anyone who is paying attention that brands that want exposure need to pay for it. This feels reasonable enough, but the problem is that advertisers aren’t used to paying for it. So can Facebook convince them to stay loyal — and shell out the dough? The answer is most likely “yes,” assuming Facebook can hold onto its user base. Which brings us to …

Teens are so infuriating right? First they LIKE you, then they’re leaving you for the likes of mobile chat and photo-sharing apps such as WeChat, Snapchat, Vine and Instagram.

Looking at it from the teen perspective, this makes sense: Why would they want to hang out at the same place their moms do, right? In fact, that’s how many teens use Facebook now — as a way to get in touch with their moms.

What does this mean for Facebook? Well, last year the company bought the popular messenger app WhatsApp for an astounding $19 billion. And while this could certainly help keep Facebook profitable as a company, it feels a little like throwing in the towel: We can’t make Facebook a place teens want to be, so let’s just give up and acquire a company that’s getting it right.

This teen migration may spell the end of Facebook for the rest of us. After all, even if Zuckerberg figures out the reach problem, the company still must continue capturing a younger audience to prevent the platform from slowly aging out.

In the short term, businesses will continue to think of Facebook as an integral part of their social strategy. (Even with teens departing, there are still one billion users worldwide.) But five or 10 years from now? My mom friends and I might have to find a new platform to share the funny articles we read on The New Yorker.