Kvetching about the petty annoyances of modern life is a tradition at The Hired Pens. With that in mind, let’s shine the spotlight on the website of the global media brand Forbes. 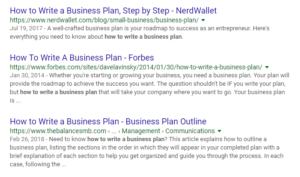 Scanning this list, you see “Forbes” — hey, that’s a reputable name. You click on the article title to head over to Forbes.com. Once you land there, you see this:

The Forbes Quote of the Day? Now, I love Miles Davis. (Not to go all jazz nerd on you, but everyone knows Kind of Blue; what you really need to check out is In a Silent Way. You’ll thank me later.) However, I’m trying to figure out how to write a damn business plan. I don’t care what Miles said about his creative process at this particular moment.

Over to the right, Forbes serves up some “interesting topics.” The problem is, I just found what looks like a great article about how to write a business plan on Google. Why is Forbes trying to point me in another direction before I even get a chance to read it?

This is an example of what’s called an “interstitial” — i.e. a web page that shows up before you can get to the content you actually want to see. In Forbes’ case, you need to click on “Continue to Article” to get to the inside page. (On the plus side, you only have to deal with this interlude once a day at Forbes.com.)

Waiting a second or two extra to see a web page isn’t a huge deal, right? Well, maybe not in the big picture (there are 86,400 seconds in a day, after all). These days, though, users don’t have that kind of patience. So why stick up an interstitial that’s just going to bug them?

Until a year or two ago, Forbes featured ads on their interstitials. That really pissed off some people, apparently. In fact, Chinese hackers hijacked what was then the “Thought of the Day” widget, “seamlessly redirecting visitors from certain organizations to another site where their computers could be infected with malware without their knowledge,” according to the Washington Post.

But at least back then, Forbes was making money off those ads — an economically justifiable tactic. Now that they’re just listing those so-called “interesting topics” alongside some random quote? I don’t get it. Come on, Forbes — free us from the interstitial!

Someone Profiles The Hired Pens for a Change Lessons from a TEDx Organizer: How to Nail Your Audition
Scroll to top