Although I am a normally functioning adult, I frequently see advertising that confuses and/or scares me. And that is the topic of today’s blog post.

Take the sample to your left. It touts financial aid opportunities for moms who want to return to school. Displayed is a creepy dude who looks like the unholy alliance of Charles Manson, George Harrison circa 1971 and Jesus Christ after a wild night out with the Apostles.

So what does he have to do with moms and education? You got me.

Next up: This unexplainable gentlemen to your right. He apparently is an example of one homeowner who either a) did or b) did not take advantage of Obama’s refinance plan.

Nevermind his monetary savvy or lack thereof, though. What I’m focused on is his bizarre mouth region. Does he have upper teeth? Is he sucking on a white-skinned orange? And if all that isn’t odd enough, he’s got those supersized glasses plopped on his massive upturned nose.

Can’t stop looking at him. Maybe that’s the point. 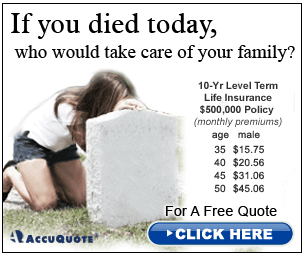 Finally, the lovely ad to your left. It’s part of a series of ads that share that tagline and depict various bereaved family members – usually kids.

Now these ads aren’t confusing by any means. I applaud the sponsor (AccuQuote) for being completely transparent in their intentions. But do they really have to show kids? And do they have to advertise on sites I regularly visit (e.g. Slate.com), thus inflicting a regular dose of major buzzkill?

I’ll admit it: This ad did get me wondering who would take care of my family if I died today. So far, I’ve ruled out the Bearded Guy and the Big Glasses Guy.

The Grumpy Old Copywriter: No, I Won’t Be Your “Friend” Promised Land State Park Over-Promising?
Scroll to top