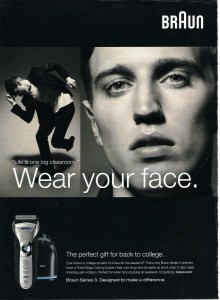 This Braun ad I spotted in a recent issue of Redbook is so awful I’m not even sure where to begin.

It presumably targets mothers who have a bit of disposable income and like to see their college-aged sons clean-shaven. So, to be fair to Braun, if you’re not one of these mothers already, pretend you are and let’s see how well this ad works on you.

If you’re like most “mothers,” even before you can contemplate the confusing (i.e. meaningless) headline WEAR YOUR FACE, I’m going to guess something even more confounding stops you.

That prick kid they picked for the photo shoot

Sure, he’s handsome. But he looks like a total jerk. The kind of kid who definitely does not remember your birthday or even to thank you when you … give him a razor. Not that he won’t be grateful. It’s just what he needs to chop up the expired Percocet tablets he bought with that extra $20 you so lovingly slipped into the card. (Until he realizes it’s an electric razor, which will take a while since he’s stoned out of his mind.)

But hey, “life is one big classroom”

That’s what appears in quotes under the other picture of him dancing in an awful hat. And it’s probably what this little jerk will say to you (his imaginary mother) when you ask why he has so many “incompletes” on his report card.

Yes, Braun, you’ve convinced us: This really is “the perfect gift for going back to college.” Well, maybe after your son gets out of rehab.

So what have we learned from this?

It’s not enough to know where to find your audience, Braun. You have to understand them, too. And even without spending $250,000 on market research, I’d wage that your target moms would far prefer to see a smiling, fresh-faced college kid on (gasp!) a college campus. And that they’d prefer NOT to think about what’s he’d been up to the night before.

In conclusion, the only thing more awful than this ad is admitting in writing that I read Redbook.