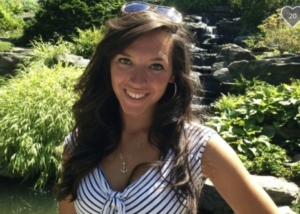 She’s never watched MTV. To her, “fleek” is the new “cool.” And no, she doesn’t feel guilty about illegally downloading movies.

A few weeks ago, I was in a discovery call with a new client. We were trying to create marketing collateral that would resonate with their target consumer: the college student. Luckily for us, there was a college student among us, King Fish Media intern Arianna Bashara.

During the call, we kept pausing to ask Arianna what she thought about various topics. Later on, she very graciously agreed to do an extended interview about how her generation thinks. In Part 1, I focused on marketing questions. In Part 2, I opened it up to my friends who had questions for her.

* Technically she was the runner-up, but obviously she was robbed!

1. The things marketers don’t get about you is …

We don’t want to be talked down to. Even though we’re only a few years out of high school, we want to be thought of as equals.

They have good customer service.

3. The three social platforms you use most are …

4. Is Pinterest just for middle-aged ladies who are into vintage wallpaper?

I love Pinterest! I get a ton of recipe and outfit ideas from there. Whether my friends and I are looking for a new DIY project or for birthday ideas, we always check Pinterest. Actually, when I’m feeling a lack of inspiration for anything, I go on Pinterest and immediately have new ideas.

5. Do you think email is dead? What’s replacing it?

I still read my email, but if a company sends a million promotional emails, it just annoys me and I try to unsubscribe.

6. Lots of studies say that people who think they can multitask are just kidding themselves. Agree? Disagree?

I definitely think I can multitask. But I also know my work isn’t as good when I’m splitting myself too many ways.

7. Are you checking your Instagram feed while you answer these questions? And do only old people call it an “Instagram feed”?

I’ll scroll through Insta (that’s what most of us call it) while watching TV or when I’m eating, but I try to stay away from my phone while I’m doing schoolwork.

8. Do you watch TV, like real network TV? If so, what shows?

In general, I don’t watch real network TV, but I’ll binge watch Netflix and Hulu when I can.

9. Should advertisers bother with commercials?

I actually love watching commercials. To reach my generation, the best placement is on Hulu or Netflix, where you can’t skip over ads and the ads are usually short and sweet.

Part 2: The Real Stuff We Want to Know

1. Doesn’t it bug you guys to watch everything on your phones? Are your eyes just better?

It does bug me to read and watch things on my phone, but I’m used to it by now because of school. And yes, I often feel like my mind can never shut off because I’m always looking at a screen.

Not usually. As long as my personal information is secured, I don’t really care about the rest of it.

Probably whenever I move into my own apartment and have a consistent job. I would hope that will be around 22 or 23?

4. Do you pay attention to the news?

I have The New York Times app on my phone so I read that and get updates, but I also watch the news on TV at the gym.

5. Do you buy everything online?

While I love online shopping, I hate online buying. I love filling up my cart with cute clothes and things I like, but I find when I order things online they don’t fit right. I also CAN’T STAND sending things back. Often I’ll end up keeping clothes that don’t fit or shoes, and they just sit there because I forgot to send them back on time or I just get too busy.

I can’t stop laughing. When I’ve heard it used (can proudly say I’ve never used it), it’s used as an adjective. Examples I’ve heard… “My eyebrows are on fleek today,” “That outfit is on fleek,” etc. Translation: It means cool.

Cigarettes? None of my friends smoke cigarettes, but a handful of students do at my school.

I’ve never watched MTV, but I hear it used to be all the rage?

9. Do they like the term “vintage”? Does that mean “cool & collectible,” or is it a term you’d use to describe something “old,” like stretch-waist Capri pants?

I LOVE the term vintage. It totally means cool and collectible and something that has come back into style. If you’re uncertain about something you’re wearing with your friends, just say, “Oh it’s vintage,” and you’re all good.

Well, we aren’t as crazy as we’re made out to be. I feel like movies and headlines are always talking about how the youth of this generation is going down the tubes and honestly I don’t see it. We like to have fun, and yes we may be tied to our phones and Netflix too much, but we aren’t turning the world upside down. I will say that my generation is far too used to having things handed to them; I see a lot of people my age who aren’t willing to work for what they want.

Web Writing for Healthcare: Our Guide to Doing It Right Inbound Marketing & My Struggles with Content Anxiety
Scroll to top