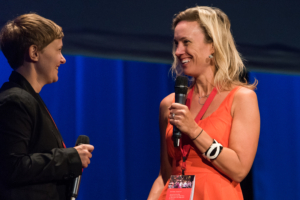 Crystal and Anna on the TEDxPortsmouth stage

After a few weeks recovering, I’m finally ready to write about what has felt like my second job for the past six months: co-organizer of TEDxPortsmouth (along with a fellow Pen, Crystal Paradis). I have so much to say about this experience that it’s going to take a couple articles.

In this first article, I’ll cover how we find our speakers — what we look for and what quickly disqualifies someone. In the next one, I’ll walk you through how to craft a great talk for a large audience of smart people.

Heard of TED but Not TEDx? Here’s a Quick Primer.

TED is an elite global conference that happens once a year in a major city. Unless you’re loaded and connected, it can be tough to get a seat at the table (or giant theater, as the case may be).

The solution? The organization started TEDx — same format, but designed with the mission of elevating locally driven ideas to a global stage. (The “x” signifies the city of the talk. For example, TEDxMontreal, TEDxCambridge and our very own TEDxPortsmouth.)

When a TEDx talk is particularly phenomenal, TED will feature it on TED.com. Already this year, two of our 15 talks have been tapped to be featured on the TED site. Which is a big, big deal. (More on that in the next installment.)

Tips for the Audition

In order to become a TEDx speaker, you first need to win over the judges at an audition. Here’s what to do (and what not to do) …

What I’ve learned after all this auditioning is this: People will show you who they are during the audition, if you pay attention. Late? Unprepared? Insist on using slides even though we said no slides? TEDx is a very collaborative process. If you’re difficult to work with during the audition, when else will you be difficult to work with? Always! And while we’re open to being proved wrong, it hasn’t happened yet.

“I didn’t really prepare anything, so I guess I’ll just wing it.” Maybe you’re saying this to manage expectations. Or maybe you just say stupid things when you’re nervous. But since we don’t know you (and the incredibly hard worker you may in fact be), here’s what we’ll think: Is this the kind of person who will put in the countless hours needed to craft, memorize and deliver an incredible talk? No “maybe” about it. Next!

Tip #3: Be able to answer, “What is your idea worth spreading?”

This is just the “TED” way of asking, “Do you have something new and interesting to say?” You want that provocative idea that people will still be talking about after the event. This may mean something totally new, which our speaker John Gargasz delivered when he shared a game-changing eco technology that converted methane gas into a usable, thermodynamic material.

“New” can also be a new take on a familiar topic. For example, we all understand (well, at least half of our country understands) the devastating emotional impact of sexual assault. Instead, TEDx speaker Sharyn Potter invited the audience to consider the economic impact of assault. Now that’s a TED talk.

Tip #4: Convince us you’re the right person to give this talk.

In the world of “TED,” this isn’t just about being knowledgeable. As an example, last year we had someone audition who had done extensive scholarly research on female pilots from the early 1900s. He’d even written a book on the topic that had received a favorable review from a popular national magazine. He checked a lot of boxes — great topic, engaging speaker, showed up when he said he would. But as much as we wanted to invite him, his audition felt more like a scholarly presentation (and honestly, a promotion for his book) than a TED talk.

The problem wasn’t that he was a man. It was that he couldn’t answer the question “Why you?” beyond “Because I wrote a book about it.” Now, if his grandmother had been one of those pilots? Or if he was actually a she and also a pilot? Now we’re getting closer to TED territory.

As I say to my anxious six-year-old all the time, “Being nervous is normal.” In fact, we want you to be a little nervous — it shows us you’re taking this seriously! A TEDx event is a high-profile gig, and we appreciate that you care enough to sweat it out a bit.

That said, if you’re shaking and freezing throughout your audition, it makes us nervous. If you have a great talk and you’re the right person to give it, maybe we can we get you to a point where you’re comfortable on stage. But what if we can’t? We’ll be wondering about that. On the flip side, win us over with your audition, and it’s easy to imagine you winning over our future audience.

So there you have it. Nail your audition, and you’ll be ready to move on to part 2: how to craft a perfect talk for the TED stage.

5 Tips to Audience Engagement: Lessons from the TED Stage

Pet Peeve: The Forbes.com Interstitial An Open Letter to Oui Yogurt From Moms Like Me
Scroll to top