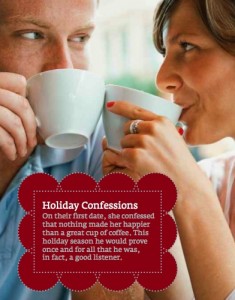 So we just found out that a project we worked on with the incredibly talented team at King Fish Media won a major award.

What? You’ve never heard of the Daveys? Well, if you were a small agency seeking big recognition, you would have. I actually really like that they have on their website (*snip*).

[The Davey Awards] is the largest and most prestigious awards competition exclusively for the “Davids” of creativity.

David defeated the giant Goliath with a big idea and a little rock — the sort of thing small firms do each year. The annual International Davey Awards honors the achievements of the “Creative Davids” who derive their strength from big ideas, rather than stratospheric budgets.

King Fish Media won for their 2010 Keurig Holiday Catalog. (We wrote the copy.)

While no one asked us to give an acceptance speech, here’s what we’d say if they did, you know, after all our blushing and tears. Part of it is the team: The best copy in the world is going to fall flat if you aren’t working with skilled people who can execute on the design and business objectives. So of course we’d thank King Fish profusely. But then if our time hadn’t run out, we might offer a little advice: Good catalog copy tells a story. The key is figuring out what story your audience wants to hear. 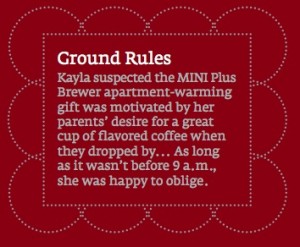 How do you know? Well, who’s buying the product? The time-starved commuter? The fresh-out-of-college millennial? The husband and wife who don’t share the same tastes? The party-throwing matriarch? In Keurig’s case, the answer was “yes” to all four. This presented a challenge because you don’t want to have four different voices for one catalog.

So what do you do? Find the commonality by going back to your product. Sure, there are four distinct audiences, but they aren’t buying a car or a hammer. They’re buying a coffee maker that gives them fresh, single-cup gourmet coffee in under a minute. What does this mean? They appreciate good coffee, but don’t have (or want to spend) a ton of time making it and don’t want (or need) more than one cup at a time. So that’s where you start. Then you spend some time thinking about how those benefits apply to each audience. 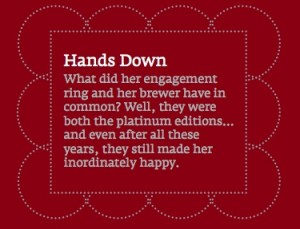 What would having fresh, gourmet coffee at the touch of a button mean for the woman who entertains a lot? Easy: Single-cup brewing means she can give each guest the coffee her or she wants, from decaf to diesel fuel. For the married couple? If they’re buying a Keurig, it’s often because they don’t share the same taste in coffee. And so on and so forth until you’ve isolated the biggest benefit for each. 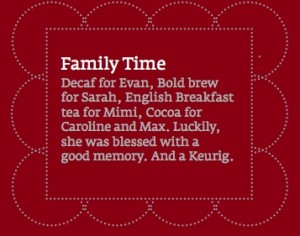 Now you’re ready to tell your story. For Keurig, we created four personas in the forms of mini stories for each audience. As you can see I’ve peppered a few throughout.

And stay tuned: It’s on my list to write a more in-depth piece about catalog writing, since it’s kind of my thing.

A Good Account Manager Is Hard to Find
Sexing Up Wheat Germ
Are Consumers Becoming Immune to Your Email?

Honey, Can You Grab Me a Refreshing Ice-Cold Bottle of Death? Behold, the Worst Greeting Card in the History of the World!
Scroll to top