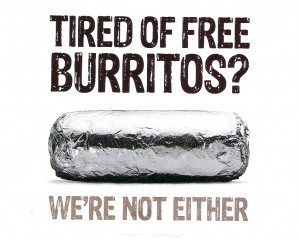 For just one blog post (just like that one, occasional vanilla shake on a long road trip), I’m going to forget how much I hate McDonalds. Why? Their slightly less evil, slightly less fat-promoting subsidiary, Chipotle, has one of the best direct-marketing pieces I’ve ever seen.

Then there’s a picture of a burrito. Right below that, in a smaller font, it says:

Clever, simple, fun. And flawless in its appeal because, come on, who is tired of free burritos?

The decision to show the burrito in its foil wrapping was just as smart as the copy. We can imagine within whatever sort of burrito we want, and the foil makes us think it’s piping hot and all melty-delicious. Plus, it looks like a little gift, which, I suspect is exactly what they want you to think of, since, hey: It’s a FREE burrito.

When it had lingered in our office for a few days, I said to Dan, “Is this here because you want to blog about it?” To which he replied, “No, it’s here because I want a free burrito.”

Mommas, Don’t Let Your Babies Grow Up to Be Obnoxious Club Kids C’mon, Honda, I Know You’re Better Than This!
Scroll to top