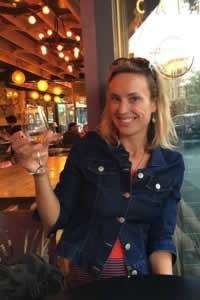 Anna left college with a degree in art and no marketable skills. Her career began unceremoniously with a humiliating stint working a frialator at Seattle SuperSonics basketball games.

She soon returned east to a slightly less humiliating job as the towel girl at a swanky health club. Seeing some promise — or just seeing the opportunity to take advantage of a disillusioned 23-year-old — a member hired her away to write telemarketing scripts for Brain Gum. (As in “chew more, study less,” IQ-enhancing bubble gum.) While the experience caused her to wrestle with her moral compass, she had never had so much fun.

With The Hired Pens, Anna has won numerous awards for her work and built a roster of clients she truly believes in. She still occasionally wonders if she should be doing something more important with her life, though that’s only when she’s with her friend who’s an ER nurse.

Anna holds an M.A. in non-fiction writing from the University of New Hampshire and a B.A. from Colby College. She lives in Portsmouth, N.H., with her husband and two sons.

"Anna does an amazing job with our projects. I am always above and beyond happy."