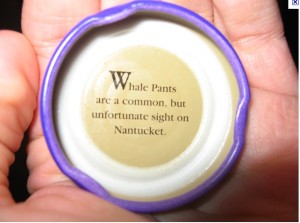 If you’ve been tirelessly following our blog, you know that last week Dan and I got out of our office to attend a few FutureM events. All about “the future of marketing,” FutureM had a great lineup of events along with some engaging speakers, including Tom First.

If Tom’s name sounds familiar, it’s because you either studied him at Harvard Business School or just like really good lemonade.

One of the two Toms behind Nantucket Nectars, Tom First didn’t go to business school, but he did get quite an education in the 10 or so years he spent at co-CEO of Nantucket Nectars (before selling it to Cadbury Schweppes for a gazillion dollars).

So, what words of advice did he have for a crowd of would-be entrepreneurs?

1. Starting a business depends upon actually starting it.

This is different than saying “talk is cheap.” Talking no doubt keeps millions of would-be entrepreneurs from making hugely expensive mistakes. But some people never start walking. Start walking and it will begin to become clear where you are going. Probably over a cliff. (Just kidding. Tom didn’t say that.)

2. Being young has its advantages …

“When you got nothing, you’ve got nothing to lose.” Tom started Nantucket Nectars soon after graduating from college. He didn’t know anything about business; he just knew he wanted to replicate the amazing peach juice he had while visiting his girlfriend in Spain. If that girlfriend had been a wife — and there had been kids and a mortgage — there might not have been a Nantucket Nectars.

When his company was just starting to explode, he was invited to speak at Harvard Business School. There, a student asked him what his exit strategy was. Having no idea what the guy was talking about, Tom replied that he would probably exit off stage left. Whether this really happened or not, when he looks back, he does feel pangs of regret for some naïve business decisions he made, top of the list being selling too soon.

4. Say yes first, then figure it out.

Before there was Nantucket Nectars, there was Allserve, a floating convenience store Tom and Tom stated to service boats in Nantucket Harbor. They delivered coffee and newspapers and before long were fielding requests for everything from engine repair to water rescue. Their policy was to always say yes, and if they couldn’t figure it out themselves, they’d find someone who could. So what is the takeaway? A) If you listen, your audience will tell you what they need. Give it to them if you want them to come back. B) You don’t need to know everything. You just need to know whom to ask.

5. You need a strong, consistent brand.

The Toms happened upon theirs accidentally. He and the other Tom had reached a certain level of success and decided it was time to throw some advertising dollars at the company in the form of a radio spot. The station kept leaving messages requesting the script … and they kept putting off writing it. The script never got written. They arrived at the recording session with no script in hand and suggested to the infuriated producer that they just “wing it.” But since they’d already paid for the time, the producer didn’t have much choice and let them at it. Well, this was where “We’re juice guys” was born. So clever was their banter, in fact, that the unscripted spot won the prestigious Mercury Award (the Grammy of radio advertising) that year.

Now here’s the only point where Tom and I disagree.

His takeaway from this story — and the advice he shared with the audience — is that to sell your product, you just need to believe in it, be yourself and “tell the truth.” One glance at this roomful of awkward engineers, tech geeks and introspective scientists made me want to jump up and add an addendum, so here it is:

He’s right that you do need to believe in your product and your brand personality needs to honestly reflect your company values. However, unless you, like Tom, are a gifted communicator, exude effervescent charm and can disarm a crowd of strangers in seconds, you might want to get a little help with the whole branding thing …

Read the details of Tom and Tom’s fascinating rise to the top.