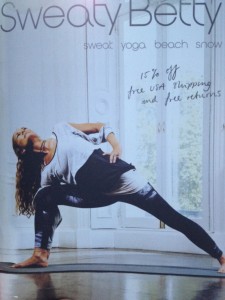 At The Hired Pens, we write a lot of catalog copy — for PUMA, Zappos, Hasbro, Stride Rite, Timberland … the list goes on.  So to stay up on things, I always read new catalogs that arrive in the mail. The one that landed today has a really cool name: Sweaty Betty. It’s filled with workout gear for women.

I like the format and the design is nice. Sure, they could have chosen more athletic, less modely-looking models, but what’s new, right?

However, the phrase they chose to describe a running T made me laugh/roll my eyes. Rather than saying it has a “built-in bra,” they said, “anatomically considered placement.” I’m all for clever copy, but the word CONSIDERED threw me. Like, “well, we were going to put the built-in bra where breasts NORMALLY are, but we decided to shake things up and put the added reinforcement on the armpits instead!”

He’s Just Not That Into You
The Sizzle and the Steak: The Art of Writing Great Product Copy
Lessons Learned About Catalog Copywriting