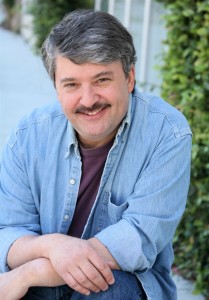 How are buccaneers and sloganeers related? Well, buccaneers were pirates who attacked Spanish and French ships in the Caribbean Sea during the late 17th century. Sloganeers are wordsmiths who write corporate taglines, city mottos and campaign slogans. So the answer is, they’re not related at all. Which is fine by us, since we don’t like being attacked during blog interviews.

Here, Eric Swartz, sloganeer and star of our previous post, “Taglines: the Good, the Bad and the Totally Offensive,” gives his insight into writing great taglines, discusses how to avoid unintentional plagiarism and even shares some tips on improving your Scrabble game.

What do you think is the best corporate tagline ever written? What makes it so successful?

A great tagline is simple, succinct, clever, positive, believable, compelling and memorable. It tells a story. I think of it as a symbolic GPS device that connects with your core values and emotional experiences.

So what’s the best corporate tagline ever written? DeBeers’ A diamond is forever is one of the best ever (since 1948). It’s a metaphor for love, an unbroken and lasting bond of trust and mutual affection. It doesn’t get any better than that.

How about a city tagline?

I get a kick out of the tagline for Eagle Pass, Texas: Where yee-ha meets olé. It may not be the best ever, but it’s my favorite. It illustrates the culture of the town by painting a picture and evoking regional dialects … using language to make it come alive. Of course, Las Vegas’ What happens here, stays here is the gold standard.

You describe a city’s tagline development as “urban renewal without having to pass a bond measure.” Can you talk a bit more about what you mean by this?

Well, that’s a humorous but pointed way of saying to city Chambers of Commerce, Economic Development commissions, etc., that you can quickly and easily give your city a facelift via branding … which is a lot less expensive than raising money to rebuild your downtown shopping district.

I’m not implying that a tagline can remove blight or improve the skyline, but, to a certain extent, it can change perception, direct focus and give people a rallying cry they can believe in.

Without giving away all your trade secrets — though you can if you want — what’s your process for writing corporate taglines?

I’m part wordsmith, rhetoritician and gunslinger. To start, I ask a lot of questions, talk to several people. I look for trigger words and concepts that jump out at me, and I start articulating ideas that leverage these big concepts. Ideas become messages, and messages become expressions. And they all relate back to the brand and to my client’s position, promise and objective.

I invert words, use vernacular, look for synonyms and antonyms, put a potential tagline in the form of a question, see how it sounds out loud. I tweak and I polish. It’s a process … and sometimes serendipity gives my work the extra oomph it needs.

Have you ever had a situation of unintentional plagiarism?

Thankfully, no. I take great pains to check for trademark, domain and commercial conflicts online. If there are red flags, I advise my client to back off, or I find a way to tweak the expression and make it more original and unique.

When first conceiving taglines, it’s not uncommon to be saddled by clichés and group think. The whole purpose is to take a common concept and find other ways of expressing it so it’s really specific and wholly different from anything else you’ve seen or heard before. Maybe that’s what the art of sloganeering is all about — to use language as originally as possible and be a clever enough wordsmith to find a simple and elegant solution that rolls off the tongue.

What words do you wish could be eviscerated from the English language? Or at least the corporate lexicon? For me, it’s “innovation” and all its many forms. For my business partner, it’s “mindshare” and “paradigm.”

Yes, “innovation” is one that’s overused and quite meaningless unless illustrated in some unusual or organic way. “Solution” is my pet peeve. And “unique” is just as empty. You’ll end up being unique … just like everyone else. It’s always advisable to stay away from trendy business jargon or fad language (“Wassup?”).

You make a living being a man of few words. How does this spill over into your personal interactions? For example, do you find yourself mentally editing long-winded people?

Wouldn’t it be great if one could go through life being clever and pithy, quoting brilliant aphorisms and proverbs, and uttering memorable taglines at the drop of a hat? I usually think of the right words to say after I leave the room. In my free time, I do think up slogans for famous people … usually politicians … or for movies.

What personality traits do you think great tagline writers share?

Actually, I like it. “Your” is the operative word, and that’s why it’s meaningful and clever. It illustrates that you’re providing a service that involves intelligence, care and deliberation. It also shows respect for the word and for the client. It has a nice feel.

On your site, you say you’re the master of the three-word novel. Three words. Go!

Back in 1997, I developed a tagline for FedEx’s new Saturday and Next-Day Delivery Service. We were going up against the U.S. Post Office, which didn’t have a money-back guarantee and promised delivery in two, maybe three, days. They waffled on the delivery day and that was our entrée. So Never on Someday was born! It’s one of my favorite creations. And it tells a story that Flaubert, Hawthorne and Poe would be proud of.

I know you’re an avid Scrabble player. Any advice?

Pick up one of those Scrabble dictionaries and memorize all the cool and weird two letter words. Other than that, being a perceptive reader of your opponent’s thoughts will help. The better you know your opponent, the better you’ll be able to judge how good their letters are — and how they feel about it. Sometimes you have to take a calculated risk and make a daring move!

Taglines: The Good, the Bad and the Totally Offensive Citgo, You Really Shouldn’t Have
Scroll to top