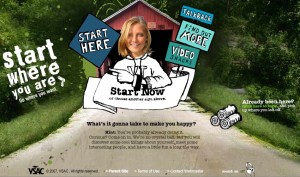 Well, usually Anna makes at least two trips across the street to Diesel Café, where she orders coffee and writes pithy Facebook status updates while she waits. And in a typical day, Dan spends at least 20 minutes complaining that his wife won’t let them buy the “really good apples” from New Zealand anymore on account of global warming.

Oh, wait, you mean when we’re actually working? We get this question a lot, so we thought we’d create a regular column where we tell you about the cool projects we’re working on. Kind of like case studies, but way less boring.

What I’m Working On

Well, I was supposed to go to a meeting with a condom company to discuss new packaging copy. But the meeting got rescheduled, so you’ll have to stay tuned on that one. Instead I’ll tell you about another project I worked on that I really loved, written as a Q&A with myself because it’s more fun than writing Challenge, Solution, Results.

So, Anna, what was the project?

It was to come up with a way to get low-income teens from Vermont excited about their future. Now the kids who were our target audience weren’t getting flooded with college brochures. And even if they were, they probably would have been chucked. We saw some pretty heavy distain for “the college bound.”

The thing is, these kids had a lot of impressive skills and talents. They just didn’t see it. So basically, our goal was to show them they could do something besides operate a Slurpee machine. You know, unless that really was their dream.

What do you have against Slurpees?

Nothing. I love a good Slurpee.

So how did you reach these kids without seeming like another well-meaning grown-up who doesn’t get them at all?

Let me begin by saying, I wasn’t working on this alone. I was working with the creative team at Kelliher Samets Volk, including the amazingly talented Rich Nadworny, who now has his own gig, Digalicious.

When we took a step back, it was pretty clear that to get these kids excited about their future, we needed to help them get to know themselves. We also knew we needed to meet them on their turf: online.

OMG, you are totally right! Central to this campaign was a fun, interactive website that used inventive video “snacks,” blogs and a thought-provoking personality quiz. Here, kids discovered passions, interests and skills they never knew they had. Then they found the support they needed to use what they learned to pave their own path forward.

What was your biggest challenge as the writer?

Making sure the copy wasn’t lame! God, talk about a critical audience. Kids have a pretty sharp BS detector. The personality quiz and supporting copy had to be thought-provoking, yet entertaining enough so it didn’t feel like work to complete. We wanted them to feel like it was worth their time — that they actually learned something new about themselves. Part of what made this project a success was realizing that whether kids are high or low achievers, their favorite subject is always the same: themselves.

Yeah, but I think the same is true for adults.

So how did you come up with the questions?

I actually spent a lot of time studying online personality quizzes to see which ones were the best. I also hung out on cool teen-centric blogs so, you know, I’d seem cool and young instead of uncool and old.

I think you’re really cool and you look great for your age!

Oh, thanks. That makes me feel really good. But let’s get back to the real questions.

Can you tell me what I want to be when I grow up?

Well, if you go to the site and lie about your age, you can take the quiz yourself.

So I heard you guys won some awards?

Yeah, a bunch, actually. We won a “Site of the Day” award from Adobe, a Web Marketing Association’s WebAward and a W³ Gold award from the International Academy of Visual Arts. But the real award was to talk to the kids themselves, who gave the site feedback like “awesome” and “rock-star status.”

Okay, the best part was the actual awards.

Getting Pumped Up for National Punctuation Day! Rather Than Getting Your Freak on, May I Suggest Getting Your Gruel On?
Scroll to top