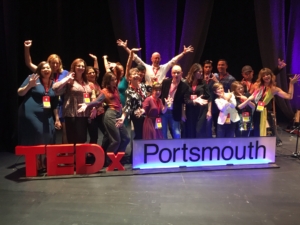 TED, which stands for Technology, Entertainment and Design, is one of the world’s most powerful and respected brands, with a robust online platform and podcasts galore. TEDx events, locally organized talks based on the TED format, are given in every major city (and a lot of small towns) across the globe every day.

As the organizer of TEDxPortsmouth, one of the biggest TEDx events, I’ve learned so much about what it takes to deliver a compelling talk for a large audience. Whether you do a lot of public speaking yourself or just need to periodically fire up those slackers in sales, applying lessons from the TED stage will help you get the audience on your side and keep them there. Nodding along, instead of nodding off.

I’m going to skip the most obvious tips — ones I assume you already know, like “know your audience,” “don’t read your slides” and “practice your talk in the mirror.” Instead I’ll focus on lesser-known tips I’ve learned from working with real speakers.

Lesson 1: Start with a story.

When Sheryl Sandberg read a draft of her TED talk to her husband — a talk that would become the best-selling book Lean In — he told her that while the facts where all there, he wasn’t being drawn in. She wisely scrapped it.

Rather than opening with stats, Sheryl decided to begin with a scene: She’s at the airport attempting to peel her sobering preschooler from her legs so she can board a plane for a business trip. It’s a moment of raw emotion, relatable and honest. The audience is right there with her, leaning in.

Good politicians do this. They don’t say, “Let me tell you about my healthcare proposal”; they say, “Let me tell about Emily. She was 13 years old before she had her first doctor’s appointment.” Find your story and you’ll find your way into your talk.

Lesson 2: Make them laugh — the earlier, the better.

This year we had a talk from a neurobiologist about how the human brain is not wired for cooperation. Steve was so nervous he lost his train of thought. But instead of freezing, he smiled at the audience, made a joke about his own brain not being wired for public speaking and reached into his pocket for his notecards. The audience laughed and everyone relaxed. He quickly put his notecards away and delivered a flawless talk.

There’s nothing like humor to relieve tension and get people on your side. Ideally, you’ll find something within the first few minutes of your talk that will make your audience laugh. TED presenters often use analogies to show humor. For example, at a TEDGlobal conference in 2011, professor Richard Wilkinson said, “If Americans want to live the American dream, they should move to Denmark.” Not exactly the stuff of standup dreams, but it got a genuine chuckle.

Lesson 3: Respect the rule of three.

There’s a principle in writing called the “rule of three,” which suggests that a trio of events — or characters — is more satisfying and memorable than any other number. For example, when one of our speakers — a doctor — was creating composite characters of typical patients, she initially had five of them. It didn’t feel right. We cut out two and suddenly the talk flowed so much better.

Three also makes sense from a structural standpoint. A talk is a story, and good stories are divided into three parts: a beginning, a middle and an end.

When you’re passionate about a topic — and the best speakers always are — there’s a tendency to go on. And on. Luckily TED talks max out at 18 minutes. BUT our attention span actually starts to max out at about 10 minutes. So if your talk is 10 minutes, great. If it’s not, you must do something at about minute 10, and periodically thereafter, to reengage the audience.

Case in point: We had a speaker a few years ago who had a talk on the long side. At minute 10, he dropped a heavy piece of chain metal onto the stage. It worked with his talk, of course — he was a scientist showing the relative lightness of a new material he’d invented — but it also woke up the audience and kept them engaged for his remaining eight minutes.

You know you should practice your talk out loud. You know you want it to sound natural — like you’re having a conversation with your audience, not lecturing. But here’s what I don’t think most speakers realize: just how LONG it takes to memorize something.

To really be “off book,” to borrow a term from the theater world, it takes about an hour per minute of speech. This means an 18-minute talk is going to take you 18 hours to memorize. (And honestly that feels fast to me.) We tell our speakers to not just memorize their talk, but “happy birthday” memorize it. One of our speakers, Rebecca Throop, told me she’d practice it while deliberately trying to distract herself by playing loud music or watching TV. “By the time the event itself came,” she notes, “it was so ingrained in my being that I actually had to release it through meditation a week later because I couldn’t stop saying it!”

And coming up next …

In my next article, I’ll share some actual writing and structuring tips, including one of my favorites from our speaker group: “If you’re really emotionally attached to a line, that’s likely one to have deleted.” William Faulkner called this “killing your darlings,” meaning, getting rid of anything that you’re fond of personally but that doesn’t advance your story. Good advice, no matter what you’re writing.

Lessons from a TEDx Organizer: How to Nail Your Audition

Our Favorite Commercials From Super Bowl LIII Just Who Do These Algorithms Think I Am?
Scroll to top